ONE OF THE GREATEST IRISH PLAYWRIGHTS YOU’VE NEVER MET ONSTAGE AT RTR
In March, Readers Theatre Repertory’s traditional “Irish” month, the company returns to its staging of forgotten Irish playwright Teresa Deevy. In an evening themed “The Belle of Waterford,” Mary McDonald-Lewis directs Holiday House, In Search of Valour, and Strange Birth.

“Teresa Deevy’s star was on the rise in Ireland at the same time the crippling censorship laws were,” says McDonald-Lewis. “She went from being known as one of the world’s most prolific playwrights, and a rule-breaker in every way, to obscurity.”

McDonald-Lewis found Deevy’s work at The Mint in New York, a company specializing in discovering lost playwrights. “Her plays are so modern, and so bold and funny, and women play such a central role… I had to stage her last season,” she says. “But our company and our audiences wanted more Teresa Deevy, so we’ve brought her back.” (More on Deevy at the Mint can be found at http://bit.ly/1ccYowj)

RTR has staged Irish theatre every March since 2002, and is excited to see an increase in works from that isle in Portland. “Artists Repertory Theatre, Corrib, Third Rail all have Irish plays in their season,” says McDonald-Lewis with a smile “Sure, it’s a great time for actors and audiences alike!”

Chrisse Roccaro as Mrs. Maher and Chris Shields in IN SEARCH OF VALOUR 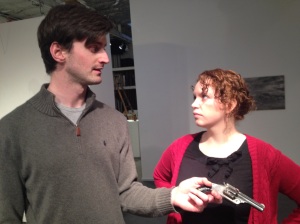 Josh Weinstein and Lissie Huff in IN SEARCH OF VALOUR