Brendan Behan’s Moving Out and A Garden Party usher in St. Patrick’s weekend at Readers Theatre Repertory, with Chrisse Roccaro as guest director for the production. Both plays were originally staged as radio shows on Radio Eireann in the early 50s, and RTR will re-create that experience for its audience.

Behan’s dark wit and insight infuse both stories, and as with real radio drama, a troupe of actors will play multiple roles. Co-artistic director Mary McDonald-Lewis says “This is a chance to return to vintage radio drama. Behan is painfully funny, and offers a scathing glimpse into the lives of Ireland’s working class.” As Behan himself said, “I have a total irreverence for anything connected with society except that which makes the roads safer, the beer stronger, the food cheaper and the old men and old women warmer in the winter and happier in the summer.”

Famed fiddler Brongaene Griffin will open the show, accompanied by an Irish piper.  “Bronnie is a real part of RTR’s March tradition,” says McDonald-Lewis. “It wouldn’t be Irish month without her!” More on Griffin can be found here: http://www.brongaenegriffin.com/

Audio on Brendan Behan’s life and work with Radio Eireann can be found here: http://tinyurl.com/acof7tq

Peter Armetta as Garda Finnegan, Brian Burger as Sgt. of the Guard, and Robert Projansky as Garda Hagarty 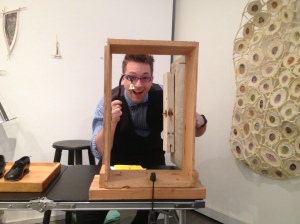 See the complete photo album on our Facebook page.