Readers Theatre Repertory, a new company focusing on staged readings, launched its first season, “Journeys,” on Friday, November 9th with two provocative one-act plays, Ophelia and Goodbye Oscar. Ophelia is an interaction between a young girl and a possible child molester, and the effect of that interaction on both. Goodbye Oscar is the story of the last moments of Oscar Wilde, and an encounter with a mysterious man as he lies dying in his Paris hotel room. The shows also performed Saturday, November 10.

Readers Theatre Rep promised a powerful series of staged one act plays at Blackfish Gallery. “We’re so pleased to have a home at Blackfish for this series,” said director McDonald-Lewis. “Staging art surrounded by art… it’s a satisfying symbiosis!”

Continued McDonald-Lewis, “We’re excited about presenting what I call ‘West Wing-length theatre.’ For a great ticket price, folks can drop in, have a glass of wine, get swept away by the stories… and an hour later be sitting at a cafe talking about what they just saw.”

Black humor and dramatic insights abound as Readers Theatre Repertory presents three plays about the theatre on December 15th and 16th, featuring the North American premiere of an award-winning one act by Portland theatre critic Steffen Silvis, Nothing if Not Critical & Scribe’s Paradox, by Michael Feingold, and Impromptu, by Tad Mosel, round out the one hour-length evening.

Nothing if Not Critical, the story of two critics driven to dangerous extremes by the theatre they review, took top honors at the 24th London New Play Festival, and was produced at the Gielgud Theatre in London’s West End in October. Scribe’s Paradox and Impromptu both examine theatre and life, each with surprising twists.

“Theatre is perhaps most revealing,” says director Mary McDonald-Lewis, “when it comments on itself. These three plays are a dark and funny backstage peek at that world.” 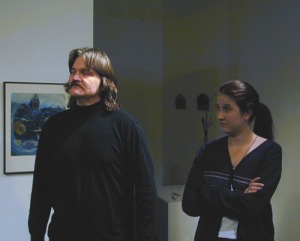 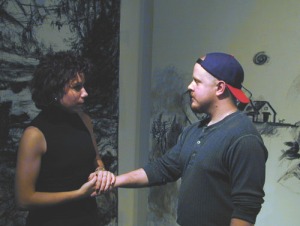 Sam A. Mowry, Jamie Miller and Jennifer Niederloh in Nothing If Not Critical

Martin, a Southerner himself, said the stories are typical of the region: “As dark as they are funny, and as full of grief as they are of joy.”

F.M. is the tale of a creative writing class on a small campus forever altered when a student’s work reveals a brilliant madness; American Tropical takes us to a Florida trailer park where a young couple and their child make a last stand after committing a terrible crime.

“In February it may be hearts and flowers on other stages,” said Mary McDonald-Lewis, one of the producers for Readers Theatre Repertory, “but it sure isn’t on ours.” The company staged a trio of one-acts February 15 and 16, themed “Survival Games.” The plays, It Ain’t the Heat, it’s the Humility, by Tom Huey; Botticelli, by Terrence McNally; and The Problem, by A.R. Gurney, Jr., all featured people playing dead-serious games.

RTR staged its shows at Blackfish Gallery, and McDonald-Lewis chose the theme in tandem with the gallery’s February art show. “What these artists all have in common is, they don’t make art for pleasure. They do it because they have to–it’s an urge, one they’re forced to do to survive as the people they are, as artists. That got me thinking about what others do to survive… what their game was.”

Don Burns and Victor Morris in It Aint the Heat 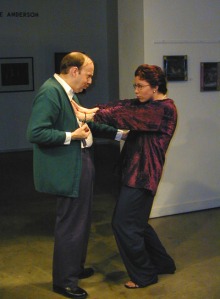 Don Burns and Jennifer Niederloh in         The Problem

“These are tales about people struggling to make their way in the world,” said director Doreen O’Skea. “And, like the best Irish drama, while there is sacrifice and sorrow, there is also hope.”

Lady Gregory, a contemporary of William Butler Yeats, wrote in the early 1900s and was a founder of Ireland’s Abbey Theatre.

Jeffrey Siri, Joseph Butler and Shan Applegate in Rising of the Moon

“I’m interested in connections,” said director Matthew Martin. “What happens when we make them, what happens when we miss them.” Martin was pleased to find two plays using the same unusual metaphor to explore his themes. “Doing laundry is such a solitary, intimate act–and surprisingly, such rich material for theatre.” 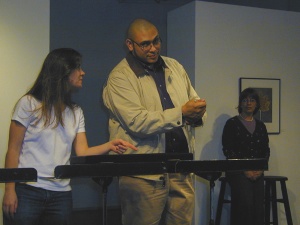 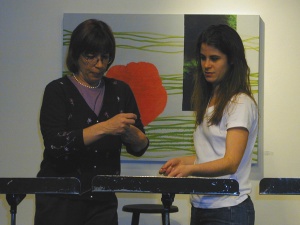 Readers Theatre Repertory concluded its successful first season on May 10-11 with The Bay at Nice, by David Hare: a passionate debate over the nature of art and life.

RTR’s home, Blackfish Gallery, inspired director Bob Martin’s choice. “The story takes place in a museum in Leningrad, mid-50s,” he said. “An artist, her daughter, a sanitation worker and an ambitious party member clash in a room full of paintings; just the kind of art-inspired arguments and alliances anyone might make in a gallery like Blackfish.”

This was the last production of the company’s first season, which both RTR and Blackfish Gallery have deemed a success. The gallery’s artist/owners are among the growing audience, and Blackfish is excited about hosting the second season there. 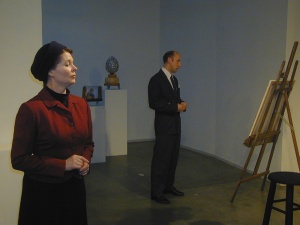 Georgia Cacy and Jeffrey Siri in Bay at Nice